Industrial milling of mined ore – from large rocks and boulders to fine particles – is a demanding process. Massive semi-autogenous mills – commonly known as SAG mills – use milling balls, as well as the weight of the ore itself, to break down the ore into smaller particles – a process known as comminution. The turning and tumbling of tons of ore within these mills create a harsh environment with high heat and constant vibration. Downtime for these mills is costly, and repairs can be dangerous – which makes preventive maintenance and proper lubrication extremely critical.

A distributor of specialty industrial bolts for mining operations was in search of a lubricant to protect SAG mill liner bolts from extreme environmental conditions, including high temperatures and harsh vibrations. With the help of Mining Products and Service (MPS) – an Australia-based company specialising in the design, supply and optimisation of wear components for the mining industry – the customer launched studies to determine the solution that would best protect the bolts from elongation beyond the stress yield threshold that was causing bolt deformation and failure.

In these trials, the companies sought to achieve consistent bolt tensions by standardising the type of lubricant used, how the lubricant was applied to the fastener assembly and the correct operation of the torque tools. They tested several different types of lubricants, including MOLYKOTE® P-74 Assembly Paste. Because the customer provides not only the bolts, but also the lubricant and the technical support, the distributor wanted a solution it could rely on – not simply as a recommendation to customers, but as its own preferred solution.

To meet mill MRO expectations and the heavy industrial demands of these large-scale ore-processing plants, the lubrication solution is needed to help control maintenance costs by reducing unscheduled stops due to loosened bolts and bolt failure. The optimal solution is also needed to protect the bolts from the dusty and abrasive by-products of the comminution process. 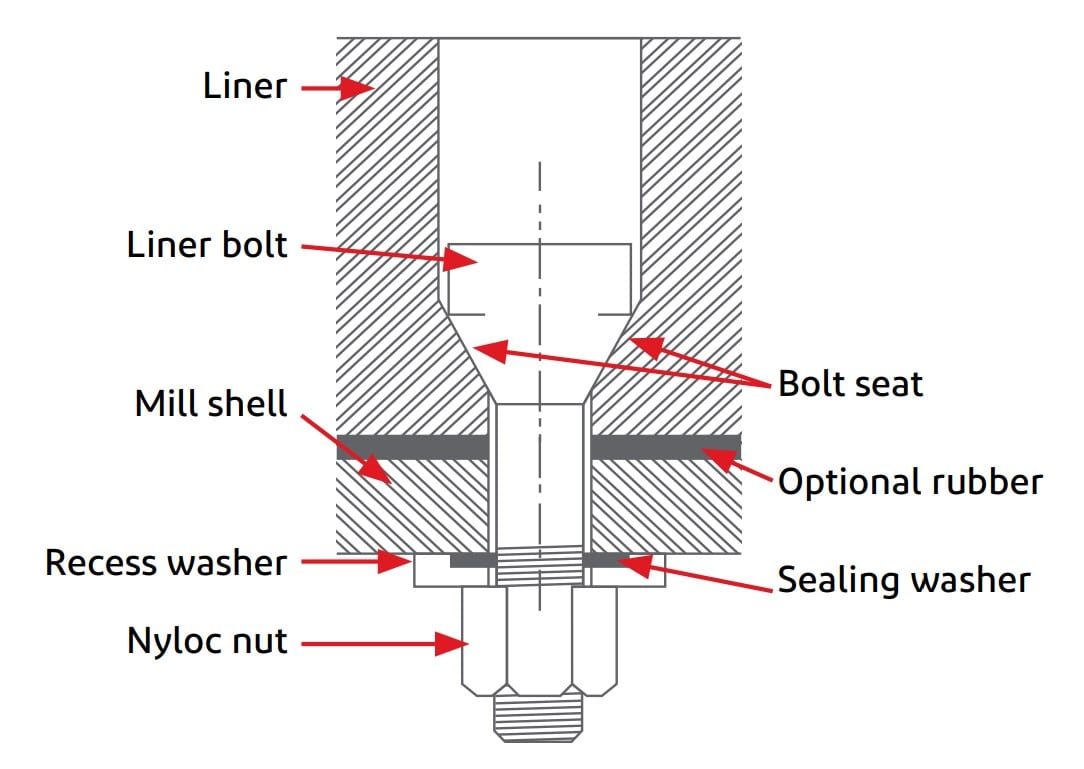 Mill liner bolts secure the protective liner to the inside of the mill. Proper lubrication is essential in ensuring the applied torque is converted to elongation and clamping force, minimising the risk of tension loss and fatigue failure.

During the research and testing process, Relining Minerals and MPS put MOLYKOTE® P-74 Assembly Paste – selected for its low coefficient of friction – to the test by comparing it to other leading lubrication solutions. 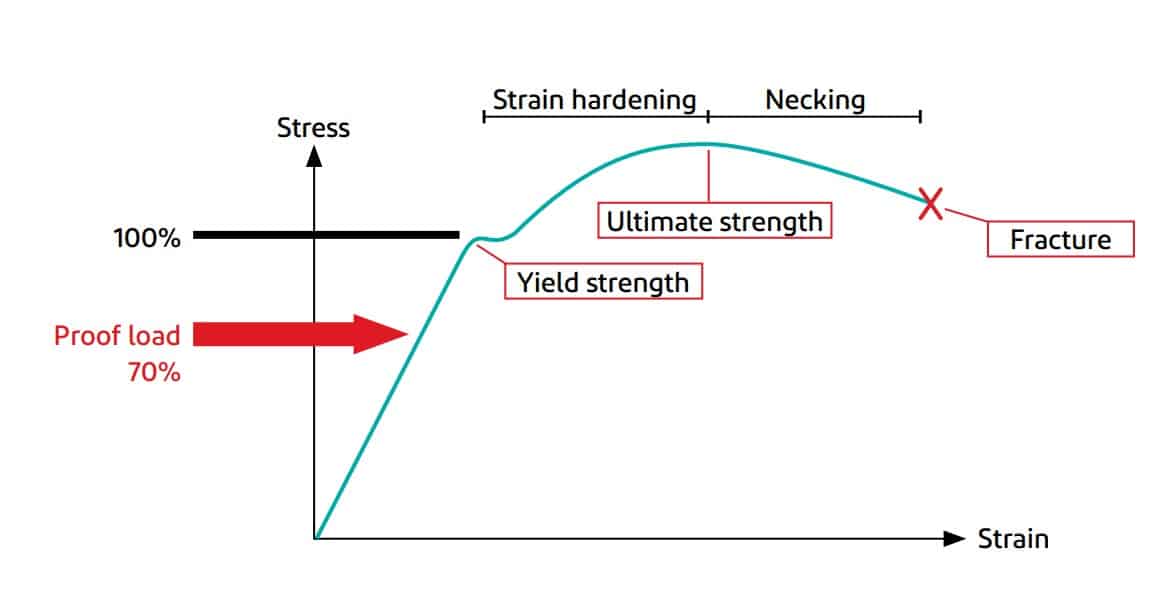 During bolt tensioning trials, MPS brought in a pulp lifter liner, configured with M48 liner bolts, from a 36-foot SAG mill. The test jig was used to calibrate actual torque/bolt load and, through proper lubrication, get it closer to the calculated torque/bolt loads to reduce the variation in the bolt loads achieved.

In the trials, which compared MOLYKOTE® P-74 Assembly Paste with the most commonly used lubricants on mine sites, MOLYKOTE® P-74 Paste consistently outperformed the best of the competitive lubricants by at least 10%. The trials also demonstrated that the application method for the assembly also was important. If the liner bolts aren’t correctly installed and are under-tensioned, they become fatigued and fail. MOLYKOTE® P-74 Paste helps reduce friction so a higher percentage of the applied torque is converted to elongation and clamping force.

In the graph below, MOLYKOTE® P-74 Paste was compared to the most commonly used anti-seize lubricant. This trial was done using a RAD 50 torque multiplier and best practices established from the tensioning trials, including: 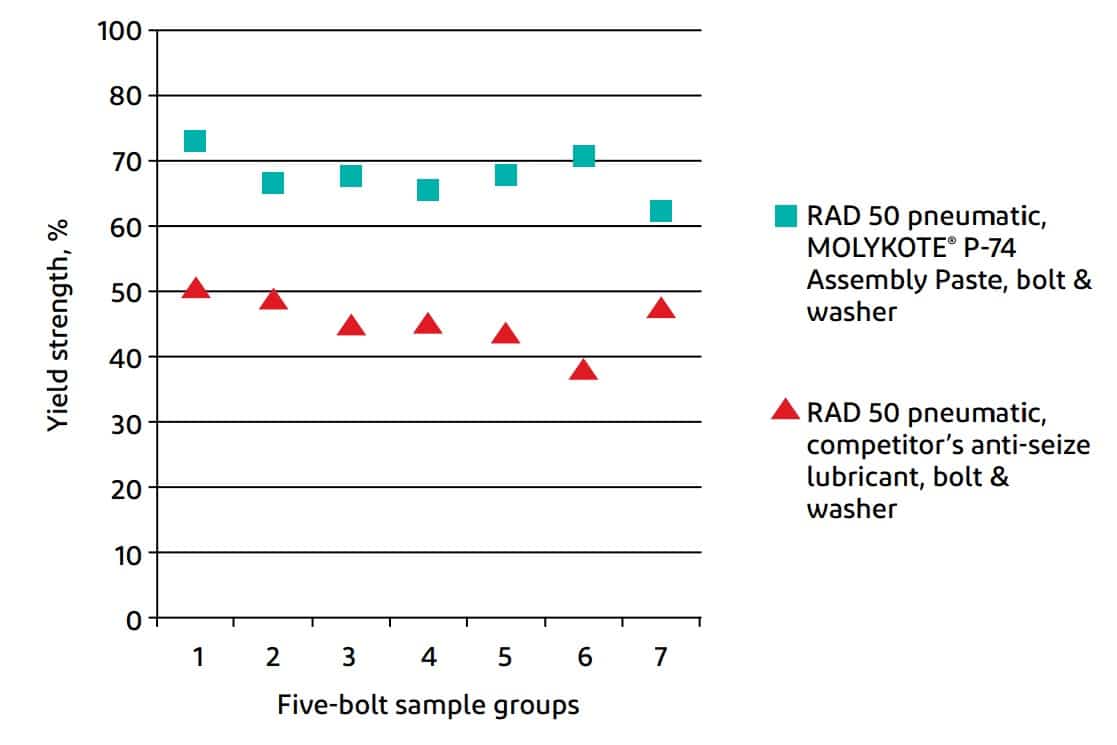 A Clear Choice For Demanding Environments

After seeing the results of the testing, the customer began recommending MOLYKOTE® P-74 Assembly Paste as its preferred specialty lubricant for mill liner applications. The company found that the paste kept bolt elongation in the optimal range with minimal tension loss, resulting in reduced bolt failures and downtime.

By preventing the bolt and liner from loosening, the distributor found that the lubricant helped reduce unscheduled stops; increasing productivity at the plants, which often are the entry point in the ore-refining process. It also resulted in a reduced risk of accidents, as the calibration and adjustment work required to address loosened bolts or bolt failure commonly is a source of physical danger.

Another added benefit to the distributor and its customers was that the paste’s lack of metal content helped minimise environmental impact.

Get The Reliability You Need to Avoid Costly Unscheduled Maintenance

Not only is MOLYKOTE® P-74 Assembly Paste able to prevent bolts from loosening and hold the mill liners in place, but the specialty lubricant also is suitable for the assembly and fitting of a wide variety of threaded connections across heavy industrial applications, such as:

With a coefficient of friction similar to oiled bolts, tightening torques can be calculated and applied uniformly – even upon repeated loosening and tightening – meaning the paste can aid in: 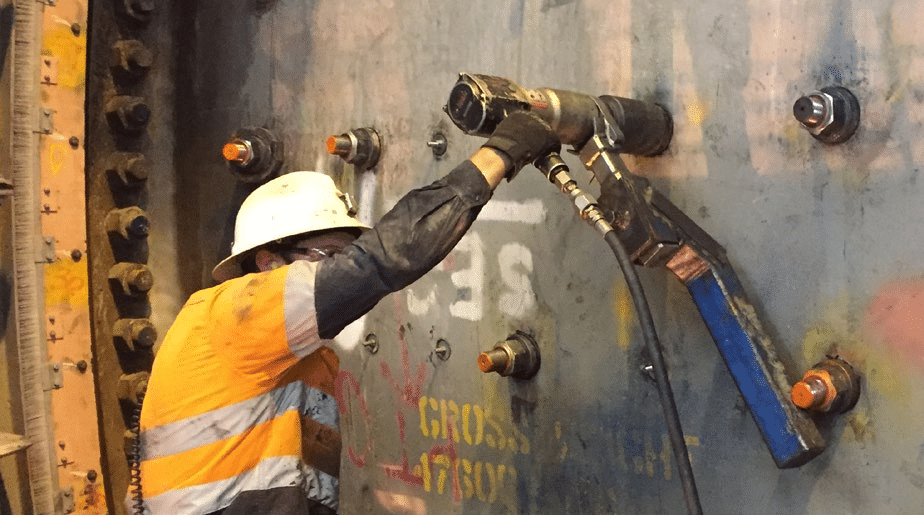